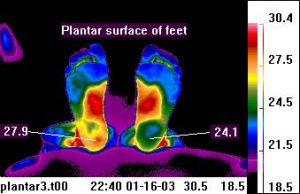 Have you gotten your thermogram yet at Knoxville Reflexology? This simple, non-invasive procedure could save your life. We found an informative article online and wanted to share it with you to expand your knowledge about thermology. Read up and call us to schedule your appointment! 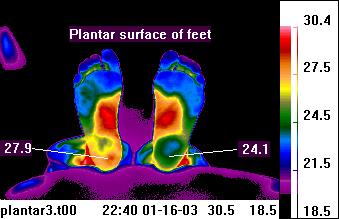 Measuring temperature differences was fundamentally important to the Greek physician, Hippocrates.  The amount of difference was noteworthy for him.  He would place mud-soaked cloths across the thorax of his patients, and where the mud dried first, it was an indicator of a disease process, or location of a disorder.  This early understanding gave way to evaluating human body thermoregulation, and how human body surface temperatures relate to underlying physical problems.   This is a field now referred to variously as thermology, medical tele-thermography, and medical thermal imaging.

The study of heat
Living organisms generate heat.  This heat radiated from the surface can be detected through the use of an infrared imaging camera.  It maps the temperature distribution over a region of the body very quickly.   The science of thermology or thermotics is the study of heat.  Each anatomical region has a distinctive thermal pattern and associated thermal differences due to local variations in vascularity and surface circulatory efficiency.  Typically, a baseline thermal profile is established for a patient, and then monitored over time.  Thermal images are, in many ways, a first line of visualization of underlying functional abnormalities.  When there is a challenge placed on the human system, such as trauma, sudden thermal shock from heat or cold, or from an internal disorder, there will be an alteration to the thermal patterns associated with an area. This is from a change to the microcirculation near the surface of the skin.  There is an observable alteration in the natural process of thermoregulation, whereby the body exchanges heat through the surface of the skin with the environment, and maintains core temperature.  The computer systems attached to the infrared cameras record these thermal changes, digitally, and allow for subsequent post-processing analysis and interpretation.

Human body as efficient radiator
Since the surface of the human body is a highly efficient radiator (emissivities ranging from ca. 0.94 to 0.99), and since that surface is not at absolute zero Kelvins, the surface radiates light as a black body radiator.  For the purposes of this discussion, it may be noted that the 50% intensity points of this emission band are located across the 8-12 micron wavelength range, often referred to as the long wave infrared band (by physicists) or the mid-IR (by chemists).  The wavelength peak of the emission shifts to shorter wavelength as the surface increases in temperature.  However, the integrated intensity across this band is very closely approximated by a linear function of the surface temperature over small temperature ranges.  Thus, by using a bandpass filter on the imaging optics to restrict the imaging to the 8-12 micron range, and integrating the received intensity across that band at each point in the plane of the source (the surface of the human subject), a temperature map of the surface may be inferred.  In short, by measuring the infrared emission intensity from the skin, a thermal map of temperature distribution of that surface may be obtained through the remote non-contact sensing of the infrared imager.

The thermal map will vary according to the physiological challenges placed on the body.  Subsequent analysis of this image provides an ideal way to assess a patient’s physiological condition as a result of  medications, surgeries, and therapies.  Any changes to the neuro-vascular system will result in either increased or decreased temperature at the surface of the body, as the brain is constantly sending signals to the various areas. These, in turn, are characterized by increased or decreased infrared emission intensity on the thermal image.

History of Infrared
In the year 1800, the infrared portion of the light spectrum was discovered by Sir William Herschel, in Bath, England.  He was the English Court Astronomer, and noted for his discovery of the planet Uranus.  His findings were done through measuring the temperatures beyond the visible red using a crystal mounted on a window to throw a color spectrum onto a table where thermometers were placed. The maximum temperature was recorded beyond the visible red.  As a result of this work, it was his son, John, who created the first thermal image, which was an evaporograph, based on alcohol and carbon.

Now in the 21st Century, the method of evaluating subtle temperature variations is valuable to modern astrophysicists, who are currently analyzing deep space, where they’re seeing new worlds with high powered infrared telescopes.  The advances in the space program and with military applications has led to the use of small, compact infrared cameras with high resolution and sensitivity that can fit in the palm of the hand.  They’re being used today by physicians in all specialties around the world, with their desire to view the subtle heat variations on the human body, efficiently, and non-invasively.

Medical Use
The F.D.A. in the United States recognizes thermographic measurement for the adjunctive evaluation of musculoskeletal, peripheral vascular, cerebral vascular, breast and thyroid, inflammatory and neoplastic conditions.  Advocates of the technology believe this imaging method is a way to identify health problems at a very early stage.

In simplest form, medical thermal imaging is best considered to be the third leg of the diagnostic imaging triad of structure, chemistry and function.  Conventional and cross sectional X-ray imaging provides structural information on the subject.  Magnetic resonance imaging (MRI) provides both a structural and a localized, but 3-dimensional chemical volume imaging element (voxel) of the body.  The third leg of this imaging triad is Infrared Thermal Imaging which provides a referred functional map of the body.  Structure and function, abnormalities associated with these, trauma, and acute/chronic conditions will all change the underlying circulatory activity.  This is directly referenced by the nearby surface temperature.

The mapping of dermatomes (areas of skin supplied by a specific spinal nerve) plays a major role in thermal imaging and its ability to measure neural dysfunction.  As an example, low back impairment can be evidenced by significant temperature differences from one extremity to the other.  The plantar surface of the feet is a good measure of this.

A supportive imaging method
As thermal imaging is adjunctive, it is not considered solely diagnostic and in relation to X-rays, it can complement the structural information provided by the X-ray, leading to a more thorough examination.  It can also help with the other imaging methods by enabling a more precise set of views, rather than a generalized approach, thereby reducing exposure.  At the Department of Neurosurgery in Yongdong Hospital, Seoul, Korea, “the areas of thermal change in cervical disc herniation can be helpful in diagnosing the level of disc protrusion and in detecting the symptomatic level in multiple cervical disc herniation patients.”1

Some patients are not candidates for MRI, for example, and therefore, thermal imaging is a low cost initial step, especially when symptoms are non-specific or multi-faceted.  Its use in brain surgery at the University of Southern California is revolutionary where they’ve determined the potential for thermal imaging to locate the margins of primary and metastatic brain tumors.2  Earlier work, published in 2002 by Mayo Clinic, demonstrated, intraoperatively, that infrared imaging “exhibited the distinct thermal footprints of 14 of 16 brain tumors.”  It provided “real-time assessment of cerebral vessel patency and cerebral perfusion.”3

Time, volume of patients, and previously undiagnosed conditions all contribute to making the initial patient examination challenging for the dedicated physician.  Therefore, thermal imaging with an infrared camera system can be an efficient and highly objective way to get valuable physiological data that can make a difference.  It is absolutely non-contact, with no radiation or penetrating forces being sent into the body.  The thermal imaging test facilitates early diagnosis and successful treatment plans.  It can preclude the necessity for performing more invasive tests that could be painful, stressful, or even hazardous, and even avoid those procedures that might prolong recovery.  Thermal imaging also helps to verify a patient’s progress through therapy and rehabilitation. Repeated passive infrared images can be sequentially compared. It can help document whether novel and unusual treatments and therapies have benefit and show progress for the patient.  The test can also indicate whether change is temporary or more permanent.

Why Are We The Best?

Improving the health of our community

Knoxville Reflexology Group, Inc. is dedicated to improving the health and well-being of their clients. Through cutting edge techniques, a thorough knowledge of the human body and an understanding of the pathology of disease we aim to provide a personal approach to your treatment, to the best of our ability and knowledge so that in doing so you will be able to reconnect with your whole being, mind, body and spirit.

Here at Knoxville Reflexology Group, Inc. our philosophy is grounded in the belief that learning is a lifelong process built upon a solid educational foundation. We are sensitive to the needs of our clients and offer a supportive environment to enhance the well-being of each person we see. We are dedicated to teaching and offer numerous workshops to facilitate our client’s being able to make better and more informed choices about their health.

Promise to pick up where traditional medicine has failed

A Knoxville Reflexology Group, Inc. we strive to deliver what you expect and what you deserve, and we strive to deliver it each and every time. To do this we listen attentively to the challenges our client’s face promising to pick up where traditional medicine has often failed them. This is our way of saying thank you for giving us the opportunity to provide you with greater health and wellness.